At present, Spain is the number one tennis power in the world and has developed charismatic players:  Alcaraz, Nadal, Carreño, Bautista, Muguruza, Badosa, Sorribes… with fighting spirit, commitment, work ethic, sacrifice, dedication, humility, and talent:  characteristics of success on which our country is based. Spain has always produced players in the Top-100 classification of the ATP and WTA rankings, one of a very select few countries that have been able to maintain this level over many years.

The Spanish team has now won the Davis Cup 6 times (2000, 2004, 2008, 2009, 2011 and 2019) and the Fed Cup 5 times (1991, 1993, 1994, 1995 and 1998) and 10 finals. Spain has more than 1.000 tennis schools distributed all over the country and almost 200 competition tennis teams, plus we have a great structure of professional tournaments with different levels of prize money from $15.000 to the ATP/WTA tournaments in Barcelona, Mallorca and Madrid. In addition, Spain has hundreds of national tournaments in different categories. Spain has become the second country in the world, behind the United States, with the highest number of Professional Tennis Tournaments. To achieve these results, the training and development of tennis coaches has been crucial, and this tennis revolution has been possible thanks to the leadership of the Registro Profesional de Tenis : RPT (Registry of Tennis Professionals)

In 1989, Luis Mediero, one of the leading figures in Spanish tennis, founded the RPT with the main drive of offering different training programmes, international certifications and membership services to professional coaches, tennis clubs and centres of education, as well as promoting the sport at all levels.

Since its creation, the RPT has certified more than 8.000 professional coaches throughout Spain, working with the majority of tennis schools and academies in the country. In the 34 years of the RPT, it has delivered in Spain more than 1.000 training courses, 50 national conferences, 15 educational tours and 25 international symposiums, as well as running over 200 promotional activities and conducting more than 500 clinics involving more than 500.000 players, giving the opportunity to all professional coaches in Spain to have access to and be involved in our systems, methods of training and education, technology and innovations in the tennis industry. The RPT training courses and qualifications are endorsed and recognized by the Royal Spanish Tennis Federation – RFET. In addition, the RPT has become the largest and oldest promoter of Junior Tennis in Spain, annually organizing +60 tournaments throughout the national geography in the U12, U14, U16 and U18 categories, through the National Circuit RPT – MARCA, that since 1996 in which Juan Carlos Ferrero won the first edition, more than 40,000 players have participated. This Circuit organized with the support of the RFET has been recognized as a fundamental pillar in the development of our tennis.

This culture and philosophy have placed the RPT as a leader in coach training and education, which today has more than 26.400 certified coaches in 130 countries.

RPT International Tennis Program has the objective of spreading the “Spanish Tennis Teaching System” around the world, offering coaches of different countries the opportunity to know the systems and teaching methods that have proven successful in Spanish tennis.

WHO IS THE COURSE INTENTED FOR:

The RPT’s Basic Educational System has been completely renovated by a new patent: tetafime, which is composed of four interconnected, integrated and entwined pillars, TE: Technical, TA: Tactical, FI: Physical and ME: Mental, to help obtain the Ideal Competitive State.

In the Spanish System Tennis Course (SSTC), you will experience the four basic levels that make up the complete professional education training programme of the RPT.

Designed for teachers and trainers who are working with players of different ages:

Designed for all those technical coaches who work with advanced and competition level players.

Designed for all those who are involved in managing and running clubs, tennis schools, sports centres and tennis programmes.

In the Spanish System Tennis Course (SSTC), the programme is a combination of theory and practical work totalling 25 hours over 3 days.

The course offers a complete package of materials to every participant, which includes:

Folder and Manual of the Spanish System Tennis Course: 150 pages.

PRICE OF THE COURSE:

The price of the course includes:

Certificate of the International Coaches Institute

License of the Professional Tennis Coaches Association of Spain

Services of the RPT Club throughout the current calendar year, until December 31.

The professional services of the RPT CLUB will be valid until December 31 of the current year, and include:

· RPT training programs and qualifications are accredited and recognized by the Royal Spanish Tennis Federation – RFET.

· We welcome you to the exclusive #teamyellow by TENNIS-POINT and RPT, the largest TENNIS coaching club in Spain, Europe and one of the largest in the world. Are you ready?

· Liability Insurance: 300.000 € ( Coverage and Limits for Spain & Portugal, please confirm for other countries). 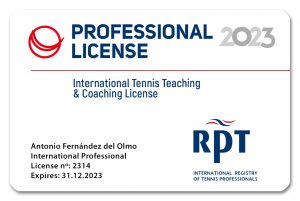 · New Certificates of Professionalism. You will receive new professional accreditation from the International Coaches Institute (ICI), and another from the Registry of Tennis Professionals (RPT). The new certificate will show the hours completed across the levels and the qualifications in the following areas: On-court Training, Study and Preparation, Online Training, Personal Development and Professional Experience, with the aim of providing confirmation of the complete training under the new framework for the regulation of the profession and sports

· You will also obtain the license of the Association of Sports Training Professionals – Asociación de Profesionales del Entrenamiento Deportivo-, accredited by the Spanish Professional Tennis Coaches Association -Asociación de Profesionales de la Enseñanza de Tenis de España– and a new certificate from the International Registry of Tennis Professionals. In addition, all members of the RPT Club with a European Community passport will receive the “European Community Certificate Supplement” certificate, which recognises their right to be trained and accredits them to work in any country of the European Union. 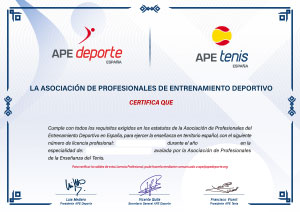 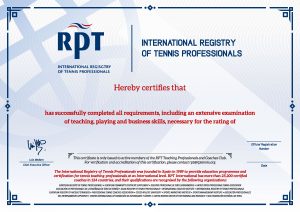 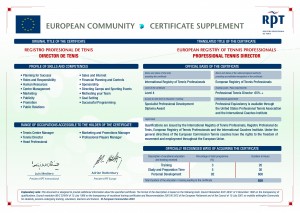 All members of the RPT Club will receive from the International Centre for the Training of Authorities and Leaders CIFAL Málaga-UNITAR: United Nations Institute for Training and Research, a Diploma as a certified member of the International Coaches Institute, in recognition of their teaching work in sports education and their contribution through the programme «Education and Sports: values to achieve a better planet 2030». 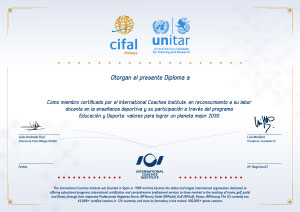 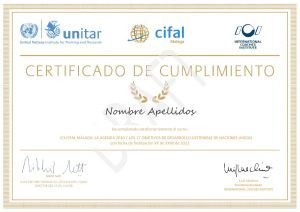 · To verify that your certification degrees are in force, you can consult the RPT, which will issue you the corresponding certificate.

· You will be able to repeat the course for free up to the levels taken previously, once a year.

· In addition, you will be able to enjoy all the advantages and services offered by the RPT Club [ more info ] 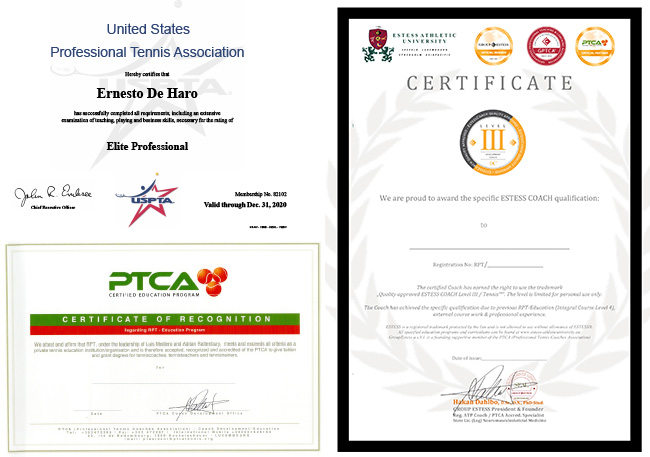 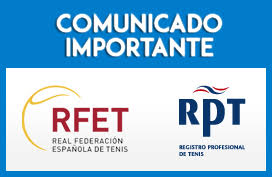